My Experience Trekking in Nepal ...as a Single Female - URBANETTE: Lifestyle Magazine & Blog

My Experience Trekking in Nepal …as a Single Female

Join me on the epic journey through the highs and lows of the Annapurna mountains.

In Manang, at a height of 3,540 meters, it’s time to acclimate. Every trekker has to stay and rest at least a day to adjust to the altitude. Inna and I stayed at a teahouse called Nilgiri Guesthouse that (surprise!) had no Wifi. However, they did have electricity, and more importantly, a group of Tibetan Buddhist monks who read from meditation books every day from 8am until 5pm. Our socially awkward teahouse proprietor explained that they have the monks come every year for five days to bless the family and ward away bad spirits. The monks explained that they meditate for the wellbeing of all mankind. They were chanting for my health, Inna’s happiness, and the welfare of human beings from here to Haiti. 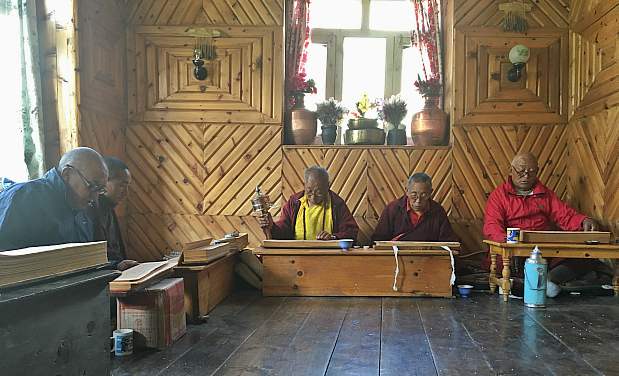 Monks at the Nilgiri Guesthouse

From Manang you can deviate from the main path and do some side treks. One of the side treks is Tilicho Lake, a lake that is neither the highest in the world nor the biggest, but meets at the corner of large and altitudinous to claim the title of the biggest, highest lake on the planet. It was a two-day trek off the main Annapurna Circuit. We would go first to Shree Karkar at about 4,000 meters, and the next day to Tilicho Lake at about 5,000 meters. It would be a 1,000 meter hike.

At Shree Karkar, we saw the largest grouping of trekkers we had seen in the last six days. June is the start of Monsoon season so most trekkers avoid the trail during that time. However, all we saw was clear skies, sunny weather, and very few trekkers. We met two Norwegian guys and a Canadian girl who were equal parts sarcasm, dirty jokes, and boundless compassion. They were also heading to Tilicho Lake the next day so we all decided to go together.

During our journey, I learned about Buddhism and intention from Bjørn, proper elephant care from Jayne, and developed a psychopath serial killer character known as Nepali Bob with Erlend. Nepali Bob had an entire album of homicidally remixed 90s songs by the end of the trip, courtesy of Erlend. It was a surprising motivator for conquering mountains. 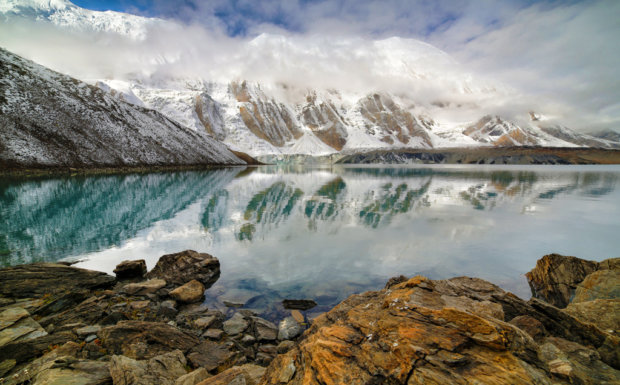 The day trip to Tilicho lake became a 14-hour hike there and back. Every step up the steep mountainside was a double-edged sword because it took you closer to the destination but also farther away from much-needed oxygen. Signs warning of landslide areas stated the obvious as we picked our way over trails that were no more than slight indents in the crumbling mountainside, and every footstep sent a flurry of small stones cascading down 300 meters to the sharp crease of the river below. Bjørn, being afraid of heights, said mantras on his meditation beads and covered the side of his face with his jacket. 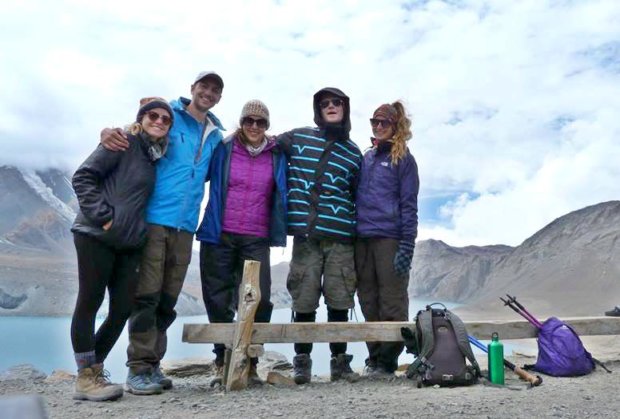 With my new friends at Tilicho Lake

The hike became not only physically strenuous but mentally demanding as well. The heights, depths, and bends of the mountainsides mirrored the folds of my mind until I was walking through a map of my own psyche. Every curve in the landscape not only revealed a fresh, astonishing sight, but a spark of an insight as well, or the dark shadow of a new doubt. Mountain peaks jumped out around bends, wind-sculpted sandstone stood guard like stoic sentinels, a herd of blue sheep rushed the craggy mountainside. Down at the bottom of the valley, two rivers met: one clear and blue, another dark from gray, glinting silt. They joined forces, became stronger, and eventually made their way to the holy Ganges.

I laughed at something or other, loud and clear over the vast expanse of glacier-blue water and felt the immense mountains absorb the sharp shock of it. It felt good to laugh in a space that was too big for comprehension, like I was laughing on the edge of the cosmos.

When we weren’t scaling mountains, we were resting in the teahouses along the way. We played card games, ate high-calorie meals, read books, and took cold showers. Things that were not luxuries before became so. A bucket of cold water was something to be grateful for, as it meant you could wash the dust and sweat off at the end of a hard day. The chance of electricity meant not having to wear a headlamp when you had to pee in the dead cold of night. “Dirty” became a relative term. I had four pairs of socks and would sniff them each day to judge which had been aired out the most recently and therefore were the least foul of the bunch to wear for the next day’s hike. 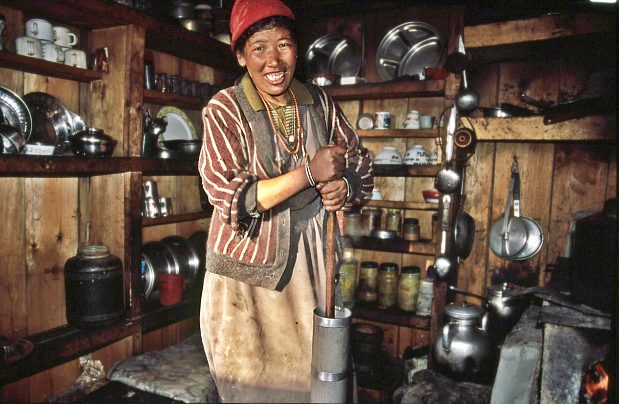 Over Thorong La Pass at 5,416 meters, Erlend and Bjørn carried some of the heavier items from my, Inna’s and Jayne’s backpacks. At this point my laptop was merely dead weight; a heavy battery pack for charging phones, and Bjørn carried it up the pass for me. That morning we had all shared the food from our backpacks, made sure all were feeling well, and set off at a pace that was conducive to everyone’s physical strength. When Jayne looked like she was inebriated at our first stop at High Camp, Inna made her eat raw garlic with her typical Russian mother-bear command: “You will eat this.”

The day turned out to be 11 hours of 50/50 uphill and downhill. It was the only time it rained during our trek and I wore my Quasimodo raincoat that hardly protected me and my backpack from what eventually turned into cold, pelting hail. However, when we reached the pass at 5,416, the day was clear. 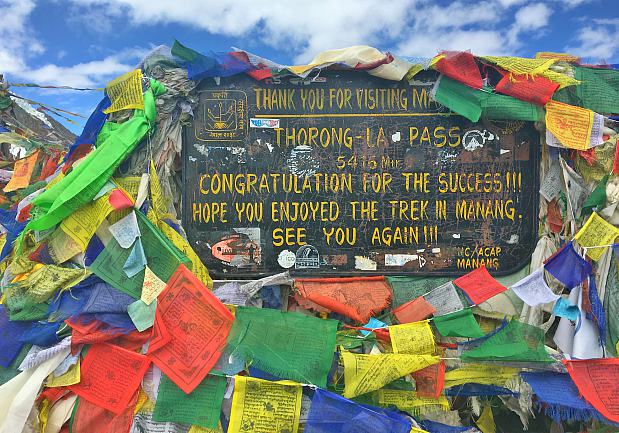 Thousands of multicolored prayer flags were wound around the signs proclaiming our victory: “Congratulations for the Success! Hope you enjoyed the trek in Manang. See you again!” Previous trekkers had covered the hillside in arranged stone messages, declaring love or the dates of their arrival at the pass. On the wall of the small wooden edifice were stickers of travel groups, photos of hikers, and the insignia of the “Lost Boy” that had been scrawled on surfaces all the way from Daraphani to Thorong La Pass. We celebrated with Snickers bars as Erlend and Bjørn fought to be the first to piss at 5,416 meters.

During the trek, I learned the Buddhist notion of impermanence. It lends to every moment the impression of exquisite present tense. The mountains of the Annapurna range, behind and before us, above and below were the most eternal images I had ever laid eyes on, but they gleaned their beauty not from their infinity, but from their impermanence, and from my few moments of time in their company. One day, the snow will melt, the mountains will crumble, the Lost Boy will find his way, and every exultant moment will pass. The most beautiful thing of all is the memory of standing in reflection of the Annapurnas and knowing that the moment is only the imprint you see of light once it’s been shut off.

The Miracle Trick That Will Make Your Skin Look Incredible
Read

10 Hacks to Help You Get Better Sleep
Read