Obsessed With Thin: How Media Goes Too Far

Can you recognize the illusion?

These days, it seems as though not only during the summer months, but year-round, the newsstands are displaying magazines of which almost every issue has a thin, beautifully airbrushed swimsuit model on its cover. Your television is showing a growing number of these unhealthily thin actresses. Bones are jutting out and implants are taking the place of real breasts. Most of these supermodels and actresses are so unnaturally thin that they risk infertility, osteoporosis, and ultimately, kidney damage. 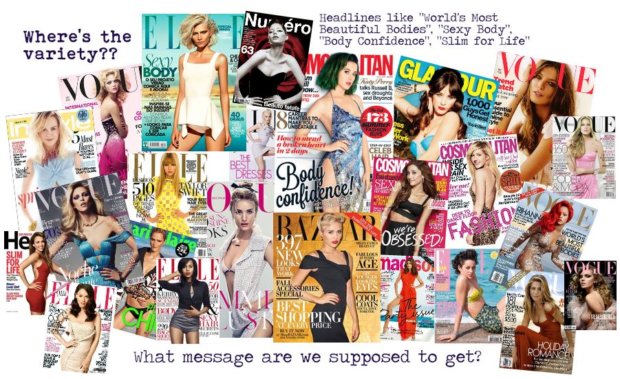 Jennifer Aniston’s former trainer says “[Jennifer’s] new figure did not come from working out with me. She lost body fat (seemingly all of it) by drastically reducing carbs in her diet – a way that’s not healthy in my books.”

“The media creates this wonderful illusion-but the amount of airbrushing that goes into those beauty magazines, the hours of hair and makeup! It’s impossible to live up to, because it’s not real.”- Jennifer Aniston in Vanity Fair 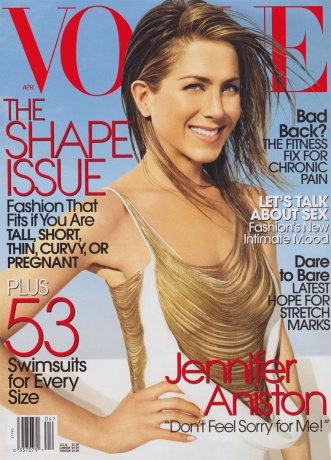 Does anyone ever think about how the overload of these images in the media affects the average woman? Well, for most women it doesn’t exactly have a positive effect. In fact, the idea of the media’s (and consequently, everybody else’s) “ideal” woman often makes “normal” women self-conscious — even if they have nothing to be self-conscious about.

There is a definite impact these Hollywood role models have on younger viewers. For most teenagers, the ideal person they want to be is a famous model or actress – and the emphasis is very much on external appearance. Perhaps this is part of the reason that so many teenagers today are unhappy with their appearance and are often on a diet.

Judging from what I’ve seen at the beach, not many men feel the same way. This bad self-image and shyness that many women feel, in most cases, can be directly linked to what they see in fashion magazines, on the runway, and in other forms of the media.

What most women and men don’t realize is that every image of a model or actress in a fashion or beauty magazine (or catalog) has been touched-up using the latest computer technology to remove bulges, pimples, stretch marks, etc. Elizabeth Hurley even admitted that her breasts were electronically enlarged for the cover of Cosmopolitan magazine.

“On my last Cosmo cover,” she explains, “they added about five inches to my breasts. It’s very funny. I have, like, massive knockers. Huge. Absolutely massive.” – Elizabeth Hurley in Details magazine 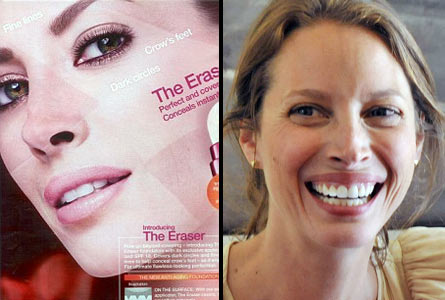 Christy Turlington explains to Elle magazine… “Advertising is so manipulative,” she says. “There’s not one picture in magazines today that’s not airbrushed.”

“It’s funny,” Turlington continues. “When women see pictures of models in fashion magazines and say, ‘I can never look like that,’ what they don’t realize is that no one can look that good without the help of a computer.”

Beyond that, there are about 100-300 professional photographs taken for each published image you see. They are taken from the absolute best angle in perfect lighting with the clothes pinned just so. And as if that wasn’t enough, the models hair and makeup is always professionally done and is constantly touched up by a makeup artist and hair stylist standing by to make sure nothing looks less-than-perfect.

“I think women see me on the cover of magazines and think that I never have a pimple or bags under my eyes. You have to realize that’s after two hours of hair and makeup, plus retouching. Even I don’t wake up looking like Cindy Crawford.” – Cindy Crawford 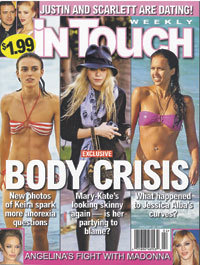 According to Prevention magazine, a “healthy weight” for a woman who is 5’9″ is 129-169 pounds. An average 5’9″ model’s weight is somewhere around 105-115 lbs. Cindy Crawford is an example of an exception to the rule: she is a model (although it’s not very often that you see her–or anyone her size–anymore), and yet she’s not stick-thin. Cindy Crawford has lots of muscle–and it looks good. She is the kind of woman more magazines need to have on their covers and in their editorials. She projects strength and beauty.

“I am not the skinniest model,” says Cindy. “But I have had success as a model, so I feel more confident putting on a bathing suit and standing in front of a camera. In life, I have all the insecurities anyone has. It’s a cliché, but we’re our own worst critics.” ~

“I finally realized that I don’t have to have an A-plus perfect body, and now I’m happy with the way I am.” – Drew Barrymore 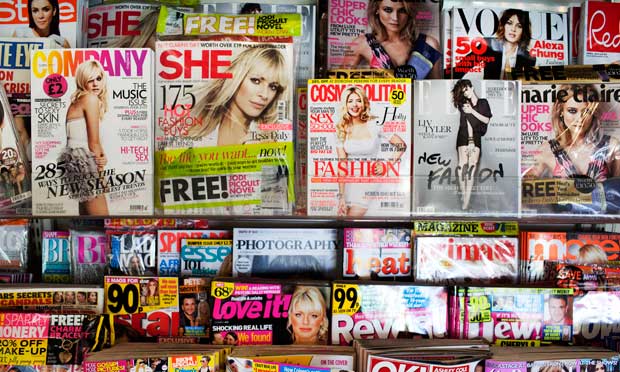 A recent survey commissioned by a British magazine found that:

In a survey conducted by Better Health Channel, they found:

According to a recent Prevention/NBC Survey,

There are over one million anorexic women in the UK alone.

Please note: The models shown are to demonstrate the trend in stick-thin models. We in no way endorse the use of emaciated models and feel that it is much better to use more natural looking women in fashion and magazines.