Women in India: The Hustler of Goa

Why I bought an overpriced bracelet from a woman who probably should’ve been on Wall Street.

On the tropical shores of the Indian state of Goa, it’s not uncommon to see locals pitching their wares as you sunbathe in the scorching heat. Men saunter by, flashing elephant-printed shawls and wraps, women trudge by pitching cool mango slices. Of all the salesmen and women on the beach, one woman in particular stands out. 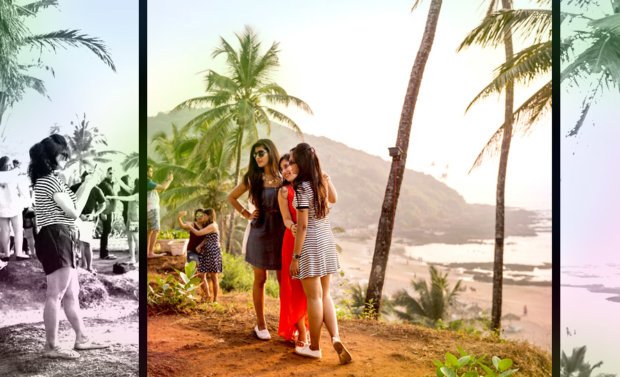 The women, Jana, approaches my friend and I demurely. We’re wary, wondering what she’ll pull out of her bag, but she strikes up a conversation instead. Her charisma pulls us in instantly. She sits on the edge of my reclining sun chair, confidentially, like we’re old friends, and the three of us enthusiastically participate in a cultural exchange.

In another world, in another life, this woman would be a high-salaried saleswoman or a CEO. She has something that her fellow salesman do not: sociability, confidence, the ability to draw us in and make us want to buy what she’s selling. I don’t want any of the anklets, necklaces, or bracelets she lays out on the chair beside me. But that’s okay. I’m not buying those items; I’m buying her. 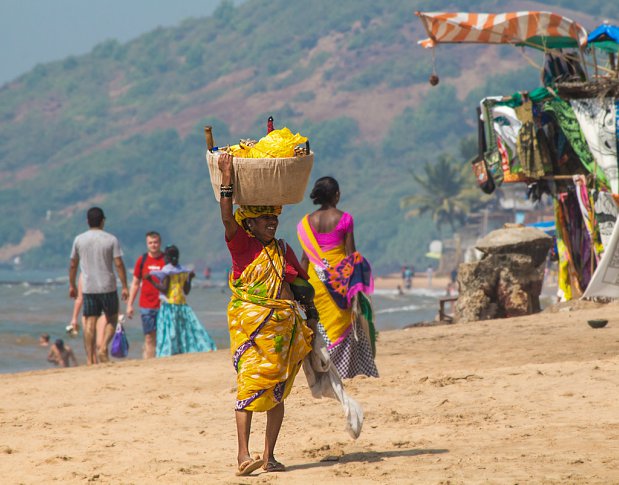 India is not a stranger to women entrepreneurship. Women-formed Self-Help Groups (SHGs) abound throughout the country. The SHGs are formed so that traditionally unbankable individuals can open a savings account with the combined funds of the group, and pull out loans. In some cases, the members (normally women) are able to use the loans to start their own enterprises. Some start tailoring shops or schools, others open snack stalls, and still others form their own beauty parlors. With the burdens of poverty in rural areas, and the restrictions on women abundant, fewer women than you might think use their loans to generate more income.

Even so, none of the SHG members I ever encountered had the knack for sales like Jana. Many of the women SHG members found themselves in positions where they could acquire loans and learn skills such as tailoring to earn their own income. However, they didn’t have the sales instinct or the marketing opportunities to make any real money. Jana on the other hand had instinct in abundance and she used the beaches of Goa as her marketing channel. 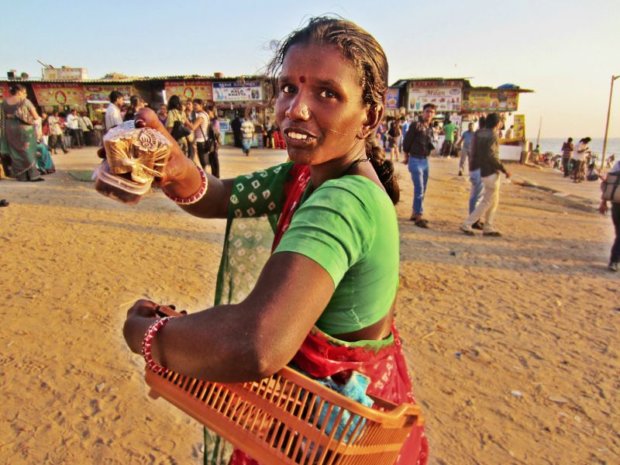 She tells us, seated at the edge of the lounge chair, that she’s from a remote village in the state of Karnataka. She comes to Goa for a few months out of the year, during the high tourist season, to pitch her wares and make some money for her family. Her husband is a stay-at-home father, taking care of their four children, including their one handicapped son.

Looking at Jana’s flat stomach through the open flap in her sari, I doubt whether she’s ever given birth to a child in her life. This could all be part of the pitch, and yet I’m still drawn in, wanting to fuel this bright spark.

I select the items I intend to buy and the haggling process begins. I offer a price and she gives me a disdainful look. Jana of Karnataka launches into a short-winded lecture on the virtues and rhythms of bartering: “No.” She says. “First I offer a price and then you bargain. That’s how this works.” She’s right. Of course she’s right. She’s an old pro, bartering with tourists on the sparkling shores of Goa for years. I’m the amateur and I had jumped the gun.

We begin again, her offering a ludicrous price, and me shaking my head and offering about half. We ping pong back and forth, settling on a price that is by all means still too high for the quality of her products. But again, it’s not the bracelets I want. I may not even wear them. I want to see her successful, I want to imagine her taking care of her potentially non-existent family. I want her to have what a woman of her background cannot possibly have but what she deserves; an office job on Madison Avenue, tailored power suits, a classroom where she can teach the impressive skills she knows, seemingly innately.

India is in every sense of the word a developing country. Their tourism, their business, their women’s rights are all growing with awkward, sometimes dizzying spurts. It is now more common for women to go to school and get jobs, and with the perpetuation of educated women, India will start seeing major shifts in women’s roles. We may one day soon see a time where women with Jana’s graceful skills at the bargaining table are nurtured and encouraged.

Until then, you can find Jana on the beaches of Goa from November to March, with a hustle that will make you swoon.