Is the media manipulating the way you view women in politics — without you realizing it?

We’ve talked about the media and the fact that 90% of mainstream media is run by six squid-like corporations with dick-swinging men at the helm. It’s no wonder the male perspective is almost all that we see and hear. It’s also no wonder that the word feminism has been muddied by this powerhouse.

A prime example of the media’s resistance to feminism can be seen in American presidential elections, where female candidates are first recognized, in a diminishing way, for being female. Comments on their looks take the forefront, where career success and professionalism comes in a distant second. 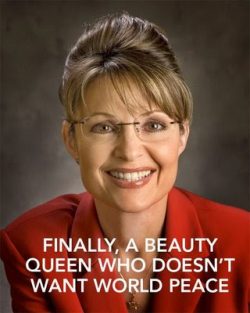 In 2008, Hilary Clinton and Sarah Palin faced different views of sexism; Clinton and Palin alike were victims of media’s focus on objectification through emphasis on sex appeal. Pitted against each other for entirely the wrong reasons, Hillary looked “tired and dowdy”, while Palin was labeled as a sex object, overshadowing her abilities as a serious candidate.

Regardless of your views on Palin and her obvious idiocy, the contents of her head –not the appearance of it– should have been the media’s focus. As hard as it is for me to say in this particular case, she deserved a chance as much as anyone else running for office — but she didn’t get it. Instead, she was continually disempowered and marginalized for being female.

Hillary Clinton has been equally objectified by being labeled as manly and haggard due to her past positions of power and pantsuits. Too much or too little femininity is grossly harped on, as is showing “too much” or “not enough” emotion; where and what is that perfect balance of femininity? I wish the media would tell us! /s

The double standards imposed by media are endless, and the disempowering effect is subtle.

The media loves Trump, in all his sexist glory

In 2016, before Carly Fiorina dropped out, she was the subject of a barrage of sexism, including this very public comment from Donald Trump: “Look at that face. Would anyone vote for that? Can you imagine that, the face of our next next president? I mean, she’s a woman, and I’m not supposed to say bad things, but really, folks, come on. Are we serious??” Trump, who’s no stranger to the media, is clearly in on these mind-games and is well aware that he gains supporters (and his female opponent loses) with every bigoted and sexist comment that escapes his hateful orange head.

The very fact that a sexist bigot like Trump is so popular says a lot about the misogynistic undertones that are pervasive in America.

The media is also no stranger to the effect of harping on his sexist comments. By constantly repeating them, and sometimes even commenting on their validity, they are reinforcing his words and influencing the vote. And they know it. The sly part is that, all the while, they claim to be calling out sexism.

Perhaps most frustrating is the fact that many people don’t even realize they’re sexist. They actually think that they’re open-minded and gender-neutral. Yet they don’t like Hillary because she’s “crooked” or had a personal email server (which, BTW, most politicians do). They can’t really make a solid, rational argument to justify why they hate her so much. But the truth, for most of them, is that cultural bias forced them into that opinion. In other words, women as a concept are competent and should be able to hold political office, but when a real woman tries, there’s always something wrong with that specific woman.

Study after study demonstrates this bias, and how the brain can be easily manipulated into thinking it’s in control when, in fact, the media is subconsciously manipulating our opinions. Case in point: You’d think that a woman would be less likely to throw sexist insults, but the media continues to pit women against each other and brainwash them into unknowingly exhibiting sexist behavior against each other. For example, Carly Fiorina may not have even realized that she was being horrendously sexist when she blurted out that Hillary Clinton will play the “woman card” every chance she gets and that “Republicans should get used to it”.

It didn’t come as a surprise when Kellyanne Conway, Trump’s campaign manager, told Ryan Lizza that being a female consultant in the Republican Party means “when I walk into a meeting at the R.N.C. or somewhere I always feel like I’m walking into a bachelor party in the locker room of the Elks club.” As long as we let men like this fill our screens, women will never be seen as equal to men.

How the media feasts on their delicious double-standards:

The media masquerades as an unbiased reporter, but let’s not forget that 90% of the media in America is owned by six squid-like corporations — all with men at the helm. Trending opinions believe that female leadership is stalled, and possibly declining. Credit goes to media’s barrage of subtly misogynistic messages.

Women are constantly challenged and criticized based on their supposed inability to juggle family and politics, whereas their male counterparts are never called into question in regard to their abilities of being good husbands and fathers, good little-league coaches or household handymen. American society is set up to hate and oppress women who are deemed as “bad mothers”. It’s part of the culture, and it’s not the same for men; parenting is rarely deemed to be the man’s responsibility, and ambitious workaholic men are revered in America. The media knows this; at the root is the fact that media, like politics, is male-dominated.

Clinton is consistently portrayed as being filled with testosterone and exploiting her family for power, while Palin’s devotion of time to the vice-presidency was scrutinized based on her having five children. If Palin’s husband had been the candidate, would he have been asked the same questions? Bill Clinton wasn’t. Due to the focus on irrelevant issues for female politicians, additional barriers are created, her voice is belittled, her policy ideas go unheard, and she’s forced to jump through far more hoops than her male competitors.

Interview questions on major news shows range from “Everyone wants to know: Have you had plastic surgery?” to “What would you wear to the Inauguration?” That, or they harp on Hillary’s (but, oddly, never Trump’s) “sense of entitlement”. The media machine wonders aloud: Is she riding the coattails of her husband? Clearly there couldn’t be love in a relationship with such an ambitious woman. When Bill could have traded her in for a younger model (a la Trump), why wouldn’t he? They must have some sort of “agreement”, right?

Trump supporters routinely tweet #repealthe19th (the constitutional amendment giving women the right to vote). One example, reported by CBS News: “Give out nice enough handbags and most broads would gladly trade their voting rights for one. #repealthe19th.”

The double standards imposed by media are endless, and the disempowering effect they have on the way society views these women is subtle – unless you’re looking out for it. How can female candidates –for any elected office– be truly successful if they are set up for failure from the beginning? It seems that these women are unable to command the same respect given to their male counterparts, and are often seen as riding the coattails of their husbands or running mates. 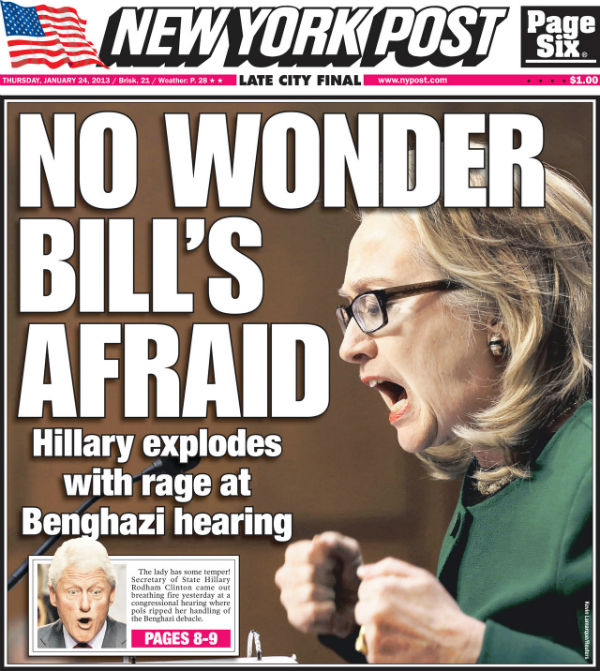 When was the last time you saw a cover criticising a male politician for their emotions instead of their views?

The media’s gender-based discrimination continues to hinder the progression of female leadership.

“Women candidates pay a real price when they are covered in a way that focuses on their appearance,” said Celinda Lake of Lake Research Partners. “Even what we thought was benign coverage about how a woman dresses has a negative impact on her vote and whether voters perceive her as likable, in-touch, confident, effective, or qualified. And, in close races, sexist coverage on top of the attacks that every candidate faces can make the difference between winning and losing.”

Read more in the ‘United Boys Club of America’ series:

This is a very powerful speech from Michelle Obama about the sexism in this election, and the dangers of gender bias in American culture:

Do you vote in local elections? Have you ever voted for a female politician?

My International Life: From NYC to France
Read