The modern way is to re-think tradition.

A lot of men say they do not welcome the idea of hyphenating the last names of their wives. They say that it is part of the compromise that couples make in marriage: men would agree to be monogamous in exchange for their wives taking their last names. What an old-fashioned, out-dated idea! In this modern day and age, what name rights do women expect to get for being monogamous?

Announcement: I would like to hyphenate my last name when I get married.

You see, I am not a movie star or a CEO. I do not have a popular name to keep even after getting married, if that’s what hyphenating a woman’s last name is supposed to mean.

People may ask “Why would you keep your surname after getting married? Don’t you love your husband enough?” Of course I would love him enough. I wouldn’t choose to spend the rest of my life with him if I didn’t. But getting married doesn’t make me the lesser person. I had an identity even before meeting my husband. I have a family who shaped me as a person. I’ve had a life of my own long before I have agreed to get married and establish a new family with him.

This practice of women always taking the man’s last name is simply sexist. Period. It comes from the idea that the man owns the woman and that he’s the only one with a long-term career.

If we are said to have equal rights with men, why can’t married couples compromise on what last name should they take in marriage: the husbands’ or the wives’? Why do some see it as “reasonable” to take the last name of the husband, while it is debatable to take the woman’s last name?

This patriarchal world has conditioned us to abandon our last names when we leave our fathers’ home to be with our husbands. Amidst all the many problems that women have had to deal with in married life since time immemorial, we have chosen not to question that “normality”. But as we embrace modernity and lots of us have become successful in our professional careers, we find it necessary to keep our last names in order to be recognized by the professional contacts we have made and the good reputations we have established even before our marriage. 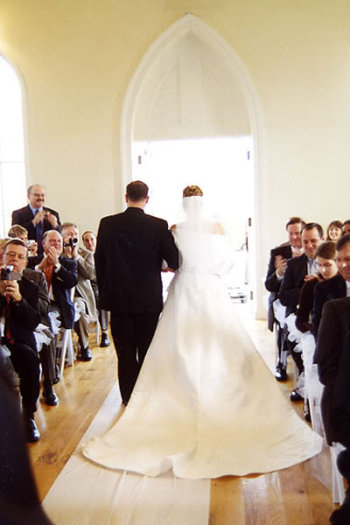 An author named Katrina Majkut has written in her article “Goodbye Hymen, Hello Hyphen” that the hyphenation of a married woman’s last name has replaced the previously heated debate on keeping a woman’s hymen intact before marriage. She has observed that, “The hyphen has become the issue of the hour because it exemplifies the gradual eradication of all things sexist and obsolete in marriage. It stands precariously in the middle of old conservative ways, new liberal practices and polarized feminist debate.”

The practice of women always taking the man’s last name is simply sexist. Period. It comes from the idea that the man owns the woman and that he’s the only one with a long-term career. Some say that even the contemporary style of hyphenation of married couple’s last names is sexist because the husband’s last name always comes last, implying that the man still has the final say in the relationship.

So how about updating things a little bit? The man can actually take the woman’s last name, starting out hyphenated and then moving to her last name. Whoever has the better-sounding last name or whoever uses their name more for business (like an entrepreneur for example), should be the one that’s used. It’s really pretty simple and there is no law that prohibits married couples from doing that. 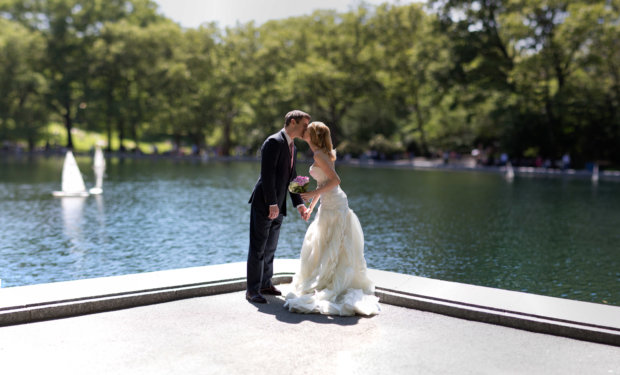 Hilary Rowland and her husband, photographed by Jake Whyman

In fact, when Urbanette Magazine’s Editor in Chief, Hilary Rowland got married, her incredible and open-minded husband made his last name his middle name, and took her last name. They didn’t know what kind of response they’d get, but aside from one high school friend who likes to tease in general, everyone thought it was very cool and for many, it seemed to actually increase his stature in their minds — as it should.

There’s no real, solid reason why a woman should ever take her husband’s last name, and no good reason why the man shouldn’t take his wife’s. What it should come down to, in a world that’s not sexist, is whomever’s name both people like better. Do either have a public profile where it’d be hard to change their name? Is one of the names hard to pronounce or spell? There are many ways to decide.

But my personal preference is hyphenation. More than a call for gender equality or for occupational reason, I see hyphenation as a way for women to remain committed to their heritage and origin, while still opting to take the last names of husbands. Joining both surnames through a hyphen is a unification of two lineages. Isn’t that what real compromise means?

I would love to keep my last name when I get married because I treasure my heritage. When it comes down to it, I’d also be open to taking my husband’s last name because I want to be identified with him. However, if my would-be husband would deny me the ‘privilege’ of name hyphenation, then I would then deny him the ‘privilege’ of my company.