One Crazy Night in Mexico

The amazing rollercoaster story of how I picked up one of the greatest treasures of my life, off the street in Mexico.

It was a warm night, as the ocean breeze gently passed through my hair. My hubby and I were on vacation in Puerto Vallarta, which is an exciting and busy town in Mexico. We were walking down a narrow, cobblestone street in the old part of town, which is filled with galleries, restaurants and shops. We had just seen a memorably funny comedy show performed by a transvestite, and had decided to wander a bit before making our way back to the hotel. 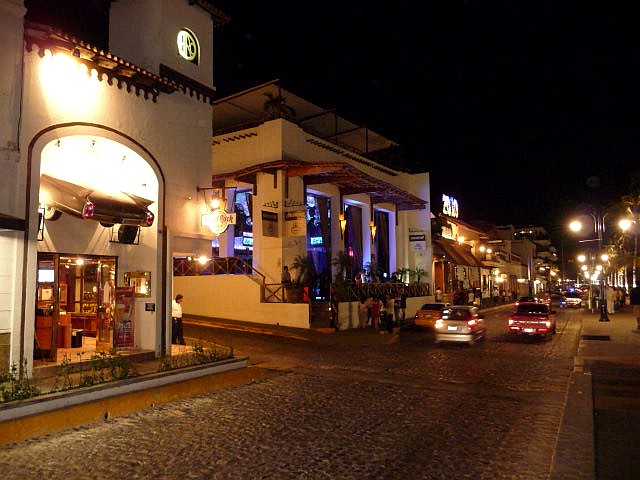 It was getting close to midnight when we spotted a small cat on the side of the dark, cobblestone street. She was playing with something; as we got closer we realized that she was gently batting at a giant cockroach (yuk!!). When I got close and started to lean in to pet her, she immediately stood up on her hind legs to press her head into my hand. The poor thing looked like she hadn’t eaten in a week, and had a black tar-like substance in and around her eyes, mouth and nose.

We didn’t want to leave her, as she was clearly hungry and very dirty, so my husband stayed with her while I went in search of cat food. I ran to a convenience store I remembered passing a couple of blocks back, where I tried to explain that I needed cat food by doing a Charades-style impersonation of a cat. Luckily they had some, so I bought a bunch and ran back to them. I ripped open the packet and the food dribbled out onto the sidewalk. The little cat ate it so fast that we gave her a second packet, which she gobbled down just as quickly.

Clearly, we couldn’t just leave her on the side of the road all dirty and starving, so I ran back to the store, bought more food, and tried to explain through gestures alone that I needed a box (not as easy as it sounds). They didn’t have one, so I went from store to restaurant to shop asking for a box. Finally, I got one and we put the kitten in it. She started crying, so we acquiesced and opened it up, expecting her to jump out and run away. But all she did was pop her head out and look at us, purring.

She definitely didn’t want to run away – she just wanted to see what was going on! So I picked her up and held her close to me. She didn’t squirm, she just purred and nuzzled under my chin. We walked a block to the beach, where husband filled the box with sand (and almost cut his hand open on a large shard of glass), to use as a litter. Still purring, Shadow nuzzled in closer as we hailed and got in a cab. I fully expected being in a car to scare her, but instead she fell asleep on my lap, purring, despite the fact that the ride was so bumpy and windy that at times I felt like we were in a washing machine!

When we finally made it back to the resort (which had a no-pets rule), we told the cab to stop short of the lobby, and snuck in through a side entrance. Mike went in first and got the elevator; then, when the coast was clear, he waved me over and I ran into the elevator, holding the kitten tightly. Back in our suite, we balled up some paper and she immediately began to play.

When we fed her, we noticed that most of the fur around her mouth had been rubbed off from eating off the concrete and cobblestone. Poor little girl! 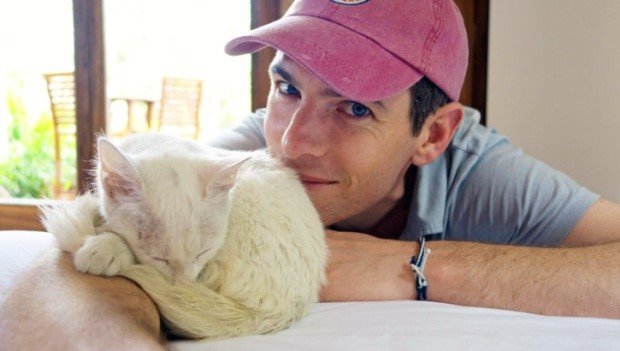 Shadow putting on the hard sell… and finding ways to immobilize us.

That night she slept in bed with us, purring and nuzzled right under our chins. She was definitely putting on the hard sell! In the morning, we woke up to her purring, still nuzzled between our heads. That’s when we really fell in love. She is such a needy little sweetheart — how could we let her have anything other than a life where she feels safe and loved?

We decided to name her Shadow, because she follows us at our feet wherever we go, and we found her in the shadows.

Once we’d decided that we were definitely going to keep her, we looked up what is required by USA customs to bring her back (which is — get this — absolutely nothing, but some states, like NY, require proof of rabies vaccination), then called the airline to see if it was possible to bring her back with us (it was – we just had to pay the $120 fee and get an airline-size pet carrier).

Despite having already given her two baths, she was still dirty and we could see fleas all over her (although we didn’t get any bites overnight). That, and she still had that black stuff that would not come off around her mouth and eyes. We trapped her in the shower for yet another soapy scrub-down, and then took her to a local vet in Puerto Vallarta to get her a checkup and vaccination papers.

This is all you need to do to bring a cat back with you from another country:

1. Make a quick trip to the vet to get your kitty a rabies shot (it’s also good to test for FIV and feline leukemia because those are catchy to other cats — but not humans) and buy some food and a carrier (usually also sold at the vet office).
2. Call the airline and pay $120 to bring your new family member with you as carry-on.

The vet in Puerto Vallarta turned out to be a woman vet who is known for wrestling crocodiles (I couldn’t make this stuff up!) in order to restrain them and give them medical treatment. She was so happy that we’d decided to take the kitten home. She ran a couple of quick tests, gave a vaccination and a flea treatment, and handed us the certificate we needed to get the kitten back to New York City. The bill for all this came to a whopping $30 (…plus $40 for a carrier). At the clinic, we decided to name her Shadow, because she follows us at our feet wherever we go, and we found her in the shadows.

Later that day we moved to another hotel in the middle of the rain forest in Mexico. My husband had organized a romantic evening for us, that included a secret room preparation and dinner on the roof of the hotel, with a view that went for miles. After our lobster appetizers, my hubby went to the room to check on Shadow. When he didn’t come back after 15 minutes, I went to check what was going on. He was Googling what to do if your cat eats poison! What we hadn’t realized is that the staff (at a “pet-friendly” hotel) would put chocolate brownies in the room. While we were at dinner, little Shadow ate them!! (Chocolate is super poisonous to pets, and can easily kill them). 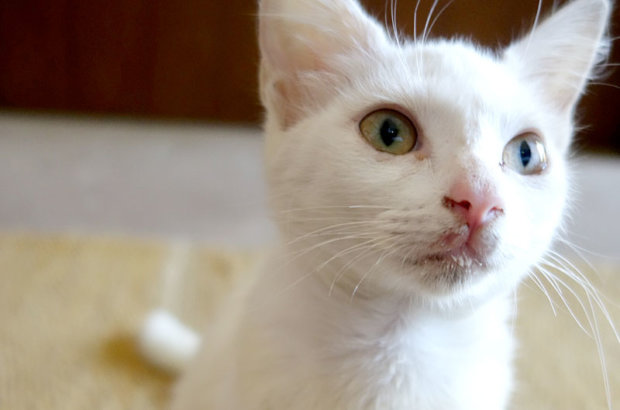 We ended up force feeding her hydrogen peroxide and trying to make her throw up, while at the same time trying to convince the staff to take us to a vet (hopefully before she fully digested her toxic dessert). Luckily, one of the staff had a friend who knew a vet who would come to the nearby town to help us. By this time, we were really scared we’d lose her (I was crying), since time had passed and she hadn’t thrown up.

After what seemed like an hour, one staffer finally agreed to take us to the vet (despite the not-so-kind hotel manager threatening to fire him for it – “it’s just a cat”). We jumped into an Escalade, which immediately started beeping that it was out of gas. With a nearly empty tank of gas, no windshield fluid, coupled with a windshield that was so dirty it was nearly impossible to see out, we sped, at neck-breaking velocity, down windy and bumpy streets.

At about 11:30pm, we pulled up to the vet’s office and jumped out of the massive Escalade. Four nearby cops holding equally massive machine guns immediately bristled and raised their guns. We quickly realized that there was a police station next to the vet’s office and motioned to the cat (“gato, gato!”), as we ran into the vet office. To our relief, the vet, who was kind enough to meet us at his office in the middle of the night, was able to give her the IV and medicine which saved her young life.

As if all that excitement wasn’t enough for one trip, later that night my hubby and I both started getting sick from food poisoning (that lobster!). Our flight was in a few hours and we were pretty much stuck in the bathroom (I’ll spare you the gory details). The hotel was booked up, so we couldn’t stay until we felt better.

On the plane that morning, we both filled our barf bags. I was so sick that I needed to be wheeled off the plane, with a blanket over my head and the cat carrier on my lap. Security didn’t even check the cat’s credentials. On the upside, we got to bypass the lines. 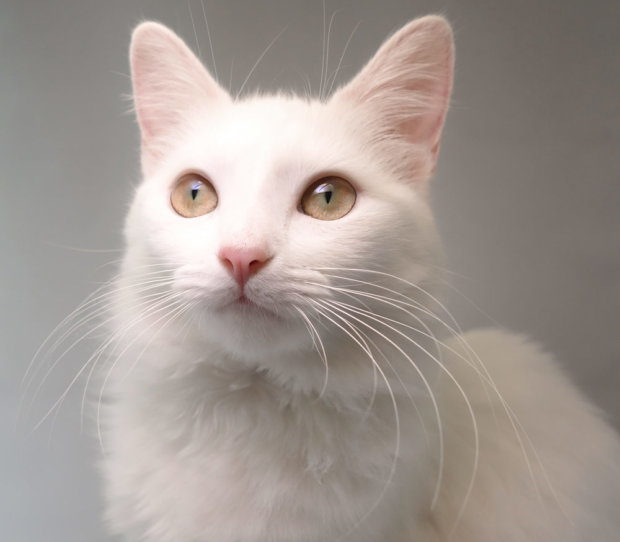 Now, Shadow travels with us whenever we go on vacation via car, and likes to sit on the dashboard and watch the cars go by. She’s a playful and loving little light of our lives. We are now those people who force videos and pictures their cat onto all their friends. Shadow has such a great personality that I’ve actually learned a lot from her about letting the bad stuff roll off (nothing phases her), always being playful (she’ll play with ANYTHING at any time), and being fearless (she’s never ever, ever scared). Our lives are immeasurably improved because Shadow took a chance on us that night — and because we decided to take a chance on her.